Bach to my Roots

Bach to my Roots

All I ever listened to for the first 10 years of my life was classical music, especially baroque music (I still love it to this day, though my tastes have diversified quite a bit since then, from that to Led Zeppelin to John Coltrane to Sergent Garcia), but I have always loved Bach the most and always will … if I ever got banished to isolation and was told the only music I could ever listen to for the rest of my life was the complete works of Bach, I’d be totally ok with that.

When I was 7 years old, my parents gave me a cassette tape (yes, that’s how old I am!) of assorted baroque music that had recently been released, among them Albinoni’s Adagio, and I’m pretty sure there was also something by Vivaldi … but of course the one piece that stood out the most to me was the Brandenburg Concerto #5 by Johann Sebastian Bach, recorded by Trevor Pinnock and the English Concert; the harpsichord solo toward the end of the first movement hit me like a ton of bricks … even though I was 7 years old and could barely even reach the pedals on the piano at the time, I promised myself I would learn to play that piece someday … I listened to it over, and over, and over … and wore out the cassette … lousy technology; thankfully some slightly less lousy technology came along a few years later, and my parents bought the full 3-CD set of all 6 Brandenburg Concertos and 4 Orchestral Suites from that same English Concert recording.

I finally decided to tackle it at age 17 – sometimes it takes 10 years to keep a promise, but hey, better late than never. However, once I decided I was going to do it, I was very motivated to learn it as quickly as possible … I couldn’t be bothered going to the store, looking for sheet music, picking it apart off a page … nah … I just figured I’d learn the whole thing by ear. I’m sure I’d heard it at LEAST 500 times by then, so it wouldn’t be too difficult … except that crazy fast part that I needed a half-time machine for, but I digress … anyway, at that time, I had no idea what baroque tuning was. This is a slightly important detail … see, Baroque ensembles (the whole resurgence of which was pioneered in part by Trevor Pinnock – the idea of playing on instruments of the Baroque era using period-appropriate articulation, phrasing, bowing, etc. and of course their tuning system … ) use A-415. Which is pretty much our modern A-flat. Soooo … I learned the entire harpsichord solo from Brandenburg #5 in D-flat major … it’s supposed to be in D. Oops! Oh well, there’s no danger of me trying to play this with an orchestra, so it’s all good.

As the years went by and I got into playing other styles of music … jazz, salsa, funk … I never really forgot about the piece but I didn’t play it as often … though I was exploring many other genres, and the lifestyle that goes with them (anyone who’s been to a Salsa club knows what I’m talking about!), Trevor Pinnock’s recording of Bach’s Brandenburg Concertos stayed very close to me – through highs and lows – graduation celebrations and break-ups … it’s always been that one recording I’d bring with me to the proverbial desert island … in fact, I seem to remember telling my father right before I moved away that if he didn’t buy me another copy I’d just take his with me to Montreal … so another copy of that 3-CD set was purchased immediately!

So, as these things go, even more years went by … now, I’m not one to make a whole pile of New Year’s resolutions – it almost invariably ends in disappointment and feelings of inadequacy – but around New Year’s 2009 it hit me how much I missed Baroque music (I forgot to mention I played viola in the McGill Baroque Orchestra my final year of University and it was my absolute favorite ensemble during my post-secondary career, bar none!), so I resolved to bring more Baroque and early music back into my life … I went to some great concerts, including the Tallis Scholars as well as a really nice harpsichord series put on by Luc Beausejour … but I had no idea what was in store for me, how my New Year’s resolution was going to bring my entire musical identity full-circle … see, the whole time I had been listening to this amazing landmark recording of the Brandenburg Concertos, I never thought of Trevor Pinnock as an actual human artist whom I could actually go see perform … I had never tried, never seen a live concert, never met him … his recording was just totally woven into the fabric of my musical soul since I was 7, and that was that … and then in a completely unrelated, seemingly unlikely context, there he was, at my workplace, around this time last year.

I told him about listening to his solo since I was 7, and then learning how to play it note-for-note in D-flat major … we had a good laugh over that! Yes, I realize I’m almost a year late writing about this meeting (hey, it took me 10 years to learn the piece, so I suppose I’m not doing too badly considering …), but I can’t possibly convey in mere typed text how heavy an experience this was for me, coming face to face with the original source of my inspiration to become a musician … how it completely derailed me for about a week … 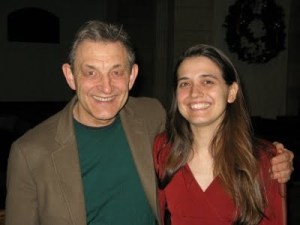 Anyway, needless to say it was all the motivation I needed to dust off the cobwebs and finally record the one piece I’ve carried with me pretty much my entire life … and I got to learn some video editing skills while I was at it. So, ladies and gentlemen, here you have it … the harpsichord solo from Bach’s Brandenburg Concerto # 5 played on the piano, in the wrong key: